May 24, 2017
We started the morning at a leisurely pace though I couldn’t wait to get out and see more of Kyoto.  The boys slept in(as usual). It’s their vacation too so I want everyone to enjoy it.  We had breakfast at the Hotel. The interior covered courtyard is a pleasant space to start and finish a day of sightseeing. A sense of comfort encourages one to linger, from the colorful garden and sunken bar that sit in the center, to the well-appointed dining areas that spill out into the courtyard.  Many sofas and chairs are scattered throughout to relax in and carrying easy conversations.

The boys were quiet this morning as we ate. I wonder if they know what an honor and gift it is to travel to this marvelous country. Have they considered that this may be the only time they will ever visit Japan?  Probably not.  They’re young.  Life seems endless to them.  I know it did for me at one time.  I don’t know when or if we will ever be back so sleeping-in is the last thing I want to do.

At 7:00 am, I was up reviewing printouts I had brought along from websites on Kyoto. My favorite is “visitacity.com”. It puts together an itinerary for free, with suggested sites and timelines for the day. I customized the itinerary to meet our needs.  We enjoy vacationing at an easy pace.  I focused on just two areas for the day, Arashiyama Park and The Golden Pavilion.

We used the hotel’s free shuttle to take us to Nijo Station. This train station is located a few minutes away from the hotel and has a local JR line that goes to Arashiyama Park. We saw four of Kyoto’s top sites, Tenryu Ji Zen Temple, Iwatayama Monkey Park, Kyoto’s most iconic bridge, Togetsukyo Bridge and the Bamboo Forest.

The train ride was comfortable. Seats are in pairs with padded fabric. At 10:30 in the morning, it wasn’t crowded. We passed buildings and homes in shades of brown and grey wood until we reached our stop. From the Arashiyama Station we stepped onto a street that placed us close to Tenryu Ji Zen Temple. A designated UNESCO site, it is one of five great Zen temples in Kyoto and considered the most impressive. For 500 yen each, we entered the extensive complex and were not disappointed. At the temple, a large room off to the left is used to store your shoes before entering the sacred space. Stepping onto bamboo mats that line the floors, we walked the perimeter of the Temple, glancing into large, airy rooms where sliding Shoji Doors had been opened. 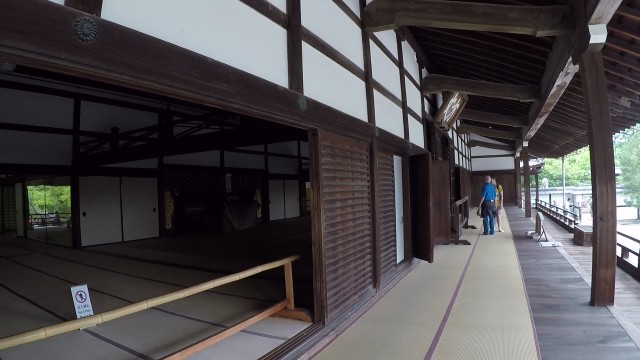 A minimalist approach is taken. Large rooms lay barren but for the bamboo matting. A few lights hang from the dark beamed ceiling and a sacred altar stands in the middle of connecting rooms. A large earthenware incense burner stands off to the side. The temple layout is a single straight line that includes a Buddha Hall, Lecture Hall and Hojo(Abbots) Quarters. Doors were opened on the opposite end of the rooms revealing a lush, manicured garden and pond beyond. It is a picturesque scene. The gardens are mesmerizing. So meticulously cared for we sat and just gazed at them. Many folks took a moment to meditate in a room overlooking the gardens. My youngest son and husband joined them. 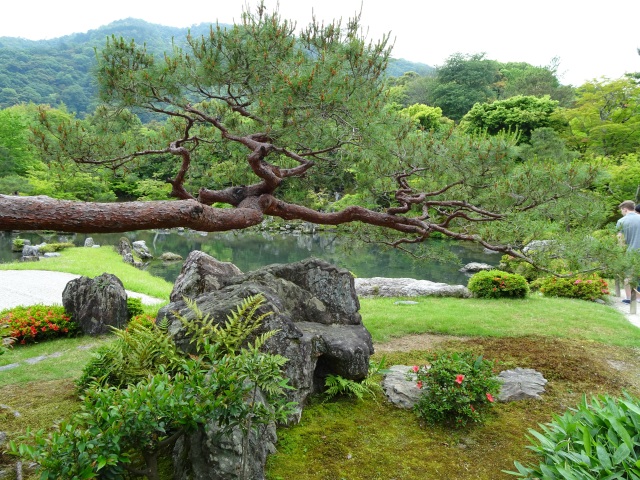 Leaving the complex, we walked through a quaint shopping district made up of eateries, boutiques, and sweet shops. Like something out of a history book, the two-story buildings are rustic townhouse like- structures built side by side. We found a restaurant on the second floor in one of them and enjoyed a bowl of udon noodles. It was a great break that energized us for our next adventure, the Iwatayama Monkey Park that laid hidden on Arashiyama mountain.

A wide, peaceful river separates the village of Arashiyama from the mountains. We walked on the Togetsukyo Bridge, that spans the river.  Many woodlike piles support the bridge and contribute to its original look that was constructed hundreds of years ago. The bridge has many romantic stories surrounding it. Togetsukyo means a pathway to the moon. Stories say that an Emperor gave the name to the bridge, enchanted by its length and the moon that rose above it. It’s used in many of Japan’s traditional paintings and for movie sets. We stopped on the bridge and just took in the view. A long fishing boat floated in the middle of the river, two men stood on each end using their poles to move through the water. Thick, green forests rose up on one side of the river while villages lined up on the other. 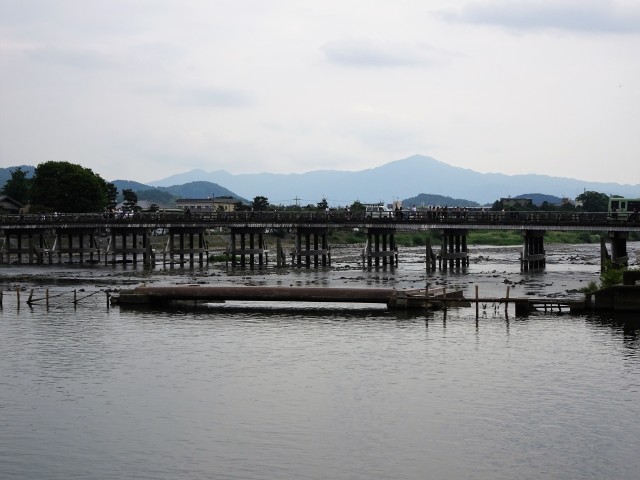 To the right, we found the entrance to the Monkey Park after crossing the bridge. In tandem with a small temple, we passed through red torii gates up a small hill. Unhampered by fences, we zigzagged up into the mountain, everyone huffing and puffing. My youngest son began to complain, “wasn’t this supposed to be a relaxing day?” I countered by replying, “What? Can’t keep up with mom? Why don’t you take your turn carrying my backpack for a while.” I knew full well that this distraction would minimize his complaining. We had decided earlier that backpacks would come in handy and that two of us in the family would carry them. They carried water and snacks, sunscreen and hats, our rain jackets along with a few other necessities.

A layer of clouds kept us cool as our stroll turned into a serious 20-minute hike. When we finally made it to the top, we were pleasantly surprised. Lots of monkeys had come down from the mountain to enjoy food that was available at the monitoring station. They sat in front of this single-story building or climbed on top of it, waiting for a tiny morsel. Some scampered beside our feet as we walked around the grounds. How marvelous to be among them!  We had never experienced this kind of interactive freedom. These Japanese macaque monkeys or Snow Monkeys(as I know them) were obviously comfortable with humans. They either sat contently or moved fearlessly around us.

There were posted signs, however, that listed certain behaviors to abide by. Visitors were asked not to stare directly into the monkey’s eyes(this was a sign of aggression), no feeding the monkey’s unless inside a designated room and avoid leaving your belongings unattended(the monkeys were thieves). 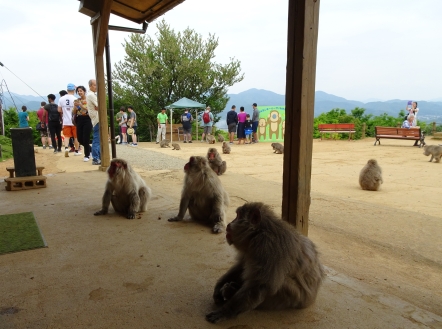 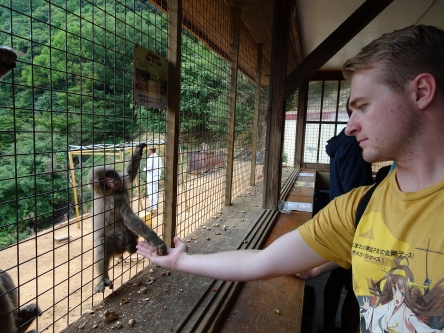 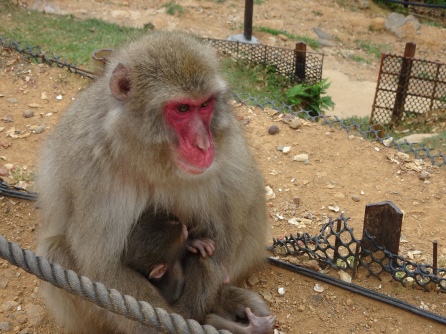 A panoramic view of Kyoto is also enjoyed from this spot. The city spreads out like a grey, blue carpet among the green rolling hills and mountains. Temple tops pop up here and there. A cluster of high rises runs along the more modern part of the city. While I was taking in the view my younger son decided to try the limits of the monkey’s character. Curious to see what would happen if he stared at a monkey, he found one sitting alone, nibbling on a piece of fruit. Apparently, he approached the monkey and stared him down.  The primate was not happy. In a few short seconds, the monkey’s eyes grew large and its mouth moved into a big O shape. This was an immediate signal that the monkey was ready to take on my son. Immediately my youngest looked away but again tested the waters, this time videotaping the whole exchange. Later he shared the video and his story with me. I wasn’t happy that he had broken one of the rules.

Back down the mountain we crossed the Katsura River and made our way to the Bamboo forest, one of the highlights of the park. Wide paved pathways follow the river. Couples rented Japanese longboats for romantic and leisurely rides. Groups of school children and families explored the park, while retired couples walked hand in hand. Turning off the promenade along the river, we followed the signs(written in English) and found the bamboo grove. Towering above our heads, the forest was impressive.  A path cutting through it brought us back out onto the street where we caught a cab to our final destination of the day, the Golden Pavilion.

A gentle rain began when we arrived but that didn’t stop us or the other tourists from exploring this beautiful complex. After paying an entrance fee, we followed a gravel path that led us to a viewing platform. Even in the late afternoon, we had to gingerly make our way through a throng of people. No wonder!  It is a sight to see!  The villa is as brilliant as the sun.  Covered in gold leaf inside and out, it stands like a shining light against forest green.  It was hard for me to believe that this was once the residence of a Shogun.   It seems otherworldly.  Later, the Shogun bequeathed it to a Buddhist order.

The gardens are beautifully manicured like most Buddhist compounds. Ponds and small waterfalls enhance the peacefulness of the area. We followed pathways, skirting around the pavilion.  Inside access is not allowed. The rain ceased and we continued our exploration.  Signs directed us along walkways that meandered through forested areas.  The crowds thinned out. We slowly took our time enjoying the grounds. Stone statues of Kannon sat behind wooden fence rails. Coins laid at the feet of the statue.  Seeking a blessing, both boys tossed coins as well. It was a final act on this very active day.

The damp weather seemed to be the right conditions for a warm Sukiyaki meal. After arriving back at our hotel, I scoured Yelp for recommendations while everyone else took showers. I found a place near us, Sukiyaki Kimura. Reading the comments, a contributor gave us a great tip that we took. He suggested that when ordering sukiyaki several grades of beef were listed on the menu. To enjoy this meal to the fullest, order the “high end” wagu beef.

We took a cab to the restaurant.  In traditional style, we left our shoes at the door! We took the stairs to the second floor. Tatami seating(traditional low tables on a matted floor) appeared on our left while private partitioned rooms were on the right. We sat on the floor in the open dining area. Japanese hospitality never ceases to amaze me! The hostess’s first concern “was I comfortable on the floor?” She had a small seat to elevate me if I would like it. I did note the slight pressure on my knees, sitting in a crisscross fashion but I was in for the full experience so I told her I was fine.

Sukiyaki is comfort food. Over a gas fire that is placed in the middle of your table, vegetables, tofu, beef, and broth are heated up. Our hostess guided us through the preparation of the dish, first filling a large bowl of broth with vegetables. While the vegetables were cooking, we whisked a raw egg in bowls placed in front of us. Next, the tofu was added with the beef following soon after. When the meat turned a light brown, it was time to take our chopsticks and grab a combination of the ingredients and dip them into the raw egg. I have to say it is a delicious combination of flavors. This was a meal that we all enjoyed. 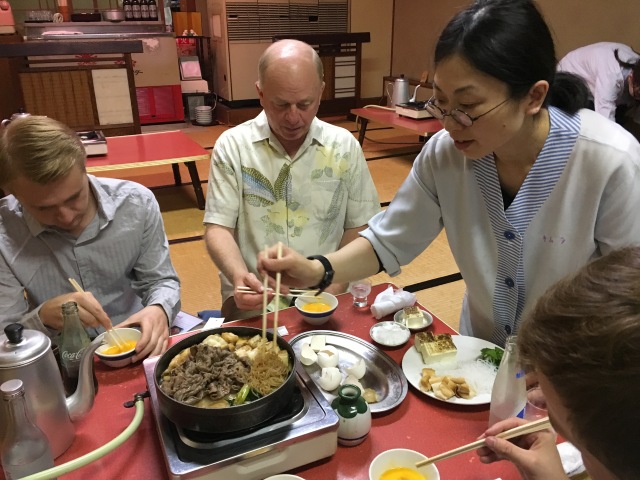