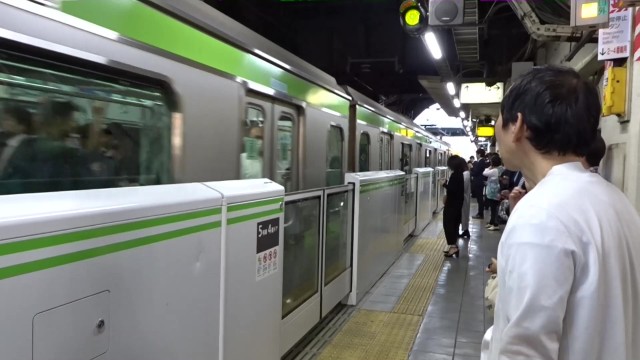 As new visitors, with one member in the family, raised near New York City(my husband), using Tokyo’s extensive mass transit system was just another day in the park according to “the expert” in the family. I was apprehensive. With a possible language barrier and my unfamiliarity in understanding the transit system, I feared that we were going to get lost. The Shinjuku train station was a few blocks away with an amazing pedestrian tunnel connection between our hotel. The downside was that it was the busiest train station in Tokyo. Called the commuter hub for the greater Tokyo area, it had 200 entrances and exits, multiple train and subway lines and over 3.5 million people using the station every day according to popular sites on the internet. I suggested heading for a nearby subway entrance in the opposite direction. It would be less daunting with one line to navigate.

Descending a wide staircase near Tokyo’s pristine government center where glass and steel buildings towered over us like giants, we walked past white tiled walls until we reached a hallway where a large map of the Toei subway line hung on the wall. Kiosks lined up below the map where tickets could be purchased. For a moment, we all stood gazing at the map dumbfounded. It was like trying to guess what kind of information was flowing through each line on a circuit board! Multiple colored lines interrupted with numbers and letters enclosed in a rectangle spread across the map.

What did it all mean? Fortunately, the names of the stations along the lines and the districts that they were in were displayed in Romanized characters. I knew what area of town we needed to get to. It was Asakusa. Sensoji Temple was located there. But how would we determine the cost of the ticket? There was no manned ticket booth to go to for help. What line should we take? Several routes went in that direction. As we debated what to do, miraculously a station attendant appeared. She was smartly dressed in her dark uniform and politely asked us if we needed help. You can imagine our relief when she spoke English!  She explained how to use the information we were looking at.  Knowing where we were and where we wanted to go, were some of the details we needed to input into the kiosk which had an English optional screen. The numbers on the map were costs in yen that we needed to deposit into the machine. After our onetime tutorial, we were familiar with the process.  It was that easy!

What I noticed immediately when we started using the trains, was the distinct cleanliness of the stations and the cars. Unlike New York’s uncomfortable plastic seats used in the subways, Tokyo has cloth seats set parallel against the walls. The floors and windows are spotless. A digital and audio announcement both in Japanese and English alerts you regarding the next stop along the line. We ended up using Japan’s rails for the duration of our visit.  Later when we dared to use the Shinjuku Station, we found it easy to navigate with digital monitors also displayed in English.

Other aspects that make using the transit system desirable and fun were the great shops and food counters that are in the stations.  Again, spotless and accessible, I was pulled into countless choices of ready-made foods behind glass displays.  From bento boxes to rice rolls and crepes, I had a hard time deciding what I should purchase.  In the end, we all agreed to get different foods to share.