Asakusa district, home of the Sensoji Temple, had many attractions and surprises for us! We disembarked from the Toei subway line, benefiting from the train attendant’s help back in Shinjuku, and climbed out only a few blocks from the Buddhist compound. Facing the Sumida river as we emerged, a broad and pristine promenade ran along the water’s edge. Pedestrians strolled along the walk, others stopped to gaze at Tokyo’s highest tower, the Sky Tree standing across the river. The breeze off the water was refreshing, and like kids easily distracted, we veered away from our intended destination(the Sansoji Temple) and walked over to the river. 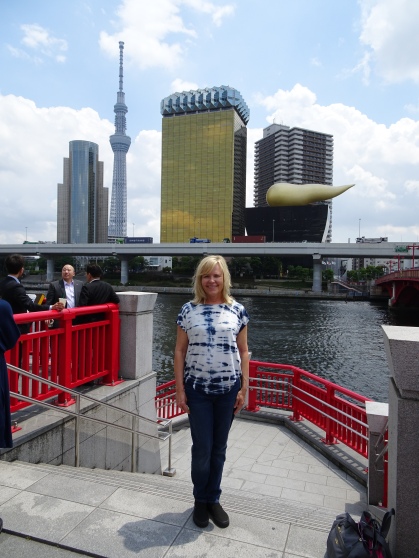 With google maps directing us to Sensoji, I momentarily ignored the day’s itinerary. The view of the river was captivating. We were immediately drawn to the riverboats docked nearby. As we walked over to the promenade, a gentleman approached us, offering a river excursion for $6.00 each. We couldn’t pass it up. It was a 30- minute ride, and he assured us it was well worth it. Our schedule was flexible, so we went for it.

His English was good, but we were in for a surprise when the narration began on the motorboat. As we intently listened to the tour guide speak Japanese over the loudspeaker, we began to realize that he had no intention of following up his narration in English. A couple from Australia started to chuckle, and soon the man commented, “I guess that’s what you get for $6.00!” We all appreciated the humor, and a friendly banter broke out between my husband and the stranger.

What the ride lacked in information, it made up in the scenery. Tokyo’s Sky Tree and Asahi Brewery were seen at various angles from the water. We cruised under historical bridges and by the charming Yakatabune boats with their hanging red lanterns and traditional low-slung design. The opportunity to simply relax and allow the cool, humid airbrush against our faces was welcoming. It re-energized us. Later, I looked up the significance of the bridges we floated past on the internet. They were the Azumabashi, the Kototoibashi, and Sakurabashi bridges. All with a unique history of their own.

It was an easy walk to the entrance of the Sensoji grounds. Milling with a lot of people, I privately noted that I had made a prudent change in our itinerary the proceeding night. Experiencing a nagging sense that I needed to revisit some information on Sensoji, I grabbed my iPad and stumbled across an events calendar for the complex. A huge festival was taking place starting Friday. It was called the Sanja Matsuri, scheduled each year in the third week of May. The event was expected to attract up to 1.5 million people. Did we really want to see the temples in such a large crowd? I moved the tour up a day.

Sensoji has two impressive gates to walk through. The first one, called “the Thunder Gate,” stands at street-side and is flanked with two fierce-looking deities. I later found out that they were the gods of Thunder and Wind. Protectorates of the compound. The second gate further in is the “Treasure House” and is noted for its massive hanging lantern that you can walk under.

A long, wide avenue stretches out after the first gate, marked with vendors on each side. We walked by food stalls, merchandise stands, restaurants. The smells from the food were enticing. We stopped and tried a deep-fried donut hole filled with bean paste. It was delicious. As we proceeded, I noticed an omikuji stall. I had some information on this from a YouTuber.  Omikuji is a Japanese fortune paper. Metal canisters sat on a shelf in front of a cluster of wooden drawers. By paying 100 yen, my youngest son picked up the canister and shook it as if he were shaking dice in a crap game (Remember, I’m from Las Vegas). Tipping it over, one stick finally slipped out from a tiny hole in the canister. A number (in Japanese characters) is written on the stick. The rod is then matched up to a drawer with the same number. He opened the drawer and pulled out a sheet of paper. The fortune is written on the paper. Only the kids tried it. (I was busy filming it all). We lucked out! Both boys had good fortune. However, if you end up with a bad one, there is a rack of metal wires beside the fortune stall where you tie your fortune. This is supposed to release you of your bad fortune with an intervention from the gods.

As we approached the main hall, I informed everyone that we could participate in the cleansing ritual that was customary before entering the building. It consisted of standing in front of a large cauldron and allowing the burning incense to pass over us. The smoke is said to have healing properties. Next, devotees washed their hands and cleansed their mouths from a well of running water that stood beside the main temple. The ritual was very soothing.

Soon the big moment was upon us as we climbed a few steps to the entrance of the main temple. No photos were allowed. A large golden altar with intricate design work, rose before us dedicated to Kannon, the goddess of mercy. Beautiful and inspiring, we stood in silence as we gazed at the splendor before us.  The first temple was built in the 600’s, making it Tokyo’s oldest temple.  The story is that two brothers pulled a Kannon from the Sumida River.  The chief of the village, understanding the importance of the statue enshrined it so that people could come and worship the deity.

I used a handful of sites to plan this itinerary.  But my favorites can be found on YouTube.  They are by TokyoCheapo, “A Beginners Guide to Asakusa,” and Okano TV, “Exploring Tokyo.”  Enjoy!