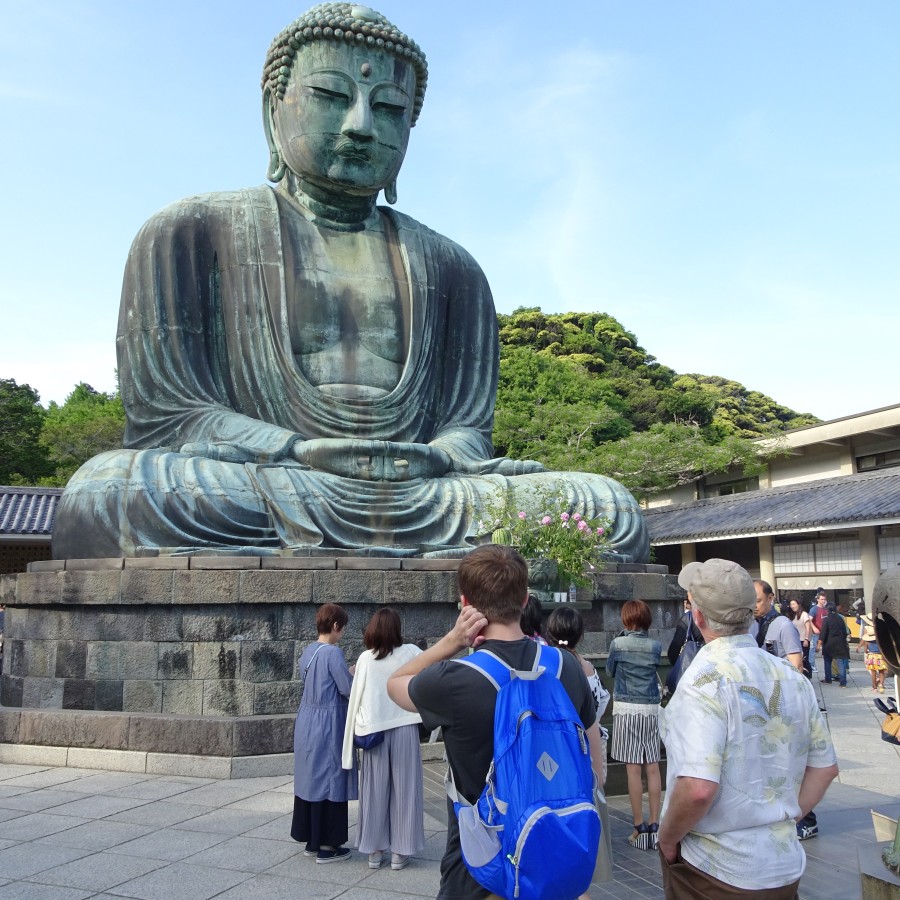 ….And whoso will, from Pride released,

Contemning neither creed nor priest,

May feel the Soul of all the East

About him at Kamakura.  By Rudyard Kipling

The hour ride from Shinjuku had worn us out.  We had taken a commuter train where seats were scarce.  We ended up standing most of the way.  I watched the landscape slip by the windows, changing from concrete and glass to forest green.  Homes, in distinctive Japanese architecture, were tucked into the folds of the forested hills.  I was looking forward to a change of pace.  Kamakura, a coastal town, was our destination.  Considered a favorable “day” trip from Tokyo, it is known for its many temples and shrines, hiking trails, and a relaxed atmosphere.  It had left a profound impression on Rudyard Kipling when he visited the city in 1889.  His poem, “Kamakura” still aptly conveys a sense of the place.

When we stepped out of the Kamakura Train Station, we joined a current of tourists that ebbed and flowed on Komachi street, which stretched behind the station. The paved path, only open to pedestrians, was lined with ice-cream shops, candy shops, souvenir shops, boutiques of every kind and restaurants.  It was a prelude to the attractions that laid ahead.

We meandered down the street, mesmerized by all the activity.   Merchants coaxed passersby to shop in their stores.  It was close to noon, and I was busy scrolling through my Yelp page, looking for a restaurant.  I found three that were popular.  With Google maps, we found the dining establishments, but to our dismay, lines spilled out of their doorways.  After circling around an adjoining street, we were back where we started.  Finally hooked by a salesman(woman in this case)holding a menu and claiming that her restaurant was fabulous,  we ducked in behind a curtain that hung in the doorway and climbed wooden stairs to the second level.  Another line formed on the stairs, but the wait was short.  Like most restaurants in Japan, the space was small.  As I glanced into the dining area, I mentally noted what people were ordering.  I was here for the total experience, and eating popular local dishes was one of them.

Piles of dried, white, pencil-thin fish garnished most plates.  Um, I guess we should try this, I thought.  I coaxed my youngest son to order a plate that came with these sardine-like fish called Shirasu or Whitebait.  He was up for the full experience while I chickened out and went for the safe Katsu dish.  Trying the Whitebait off my son’s plate, I found it crispy and airy.  Dissolving in my mouth, it had a slight “fishy” taste.  Not my “cup of tea.”  But, hey, it was a popular local delicacy, and at least I can say that I tasted it.  In fact, we all tried this delicacy and were in agreement.  Once was enough!

At the end of Komachi Street, we escaped the throng of people and emerged into a large intersection.  A bright red Torii gate towered above us.  It was the entrance to Tsurugaoka Hachimangu Shrine.  One of the main attractions in Kamakura, this shrine has an impressive avenue leading up to it.  For several blocks starting near the coast, Torii gates line up along a long promenade and create an impressive procession towards the grounds.  Torii gates, I found out later, are used to separate the secular spaces of daily life and create a holy area.

As we proceeded on the grounds, arched bridges spanned across ponds.  Beautifully manicured gardens touched the edges of the pools, and graceful structures in vermillion rose out of the forest.  There is a sense of peace, calm and restfulness felt here.   As we neared the Main Hall, we heard flutes, drums, and wooden clappers.  It was Sunday, and we were fortunate to come upon a wedding in progress.  We stood and witnessed this sacred event taking place in an open-air worship hall below the Main Hall.  I glanced around and saw that tourists were proceeding up the grand staircase that began in front of the worship hall.  We soon joined them.

This Shinto Shrine is dedicated to Hachiman kami, Japanese deities.  The Main Hall stands on top of a hill and has a commanding view of the avenue of Torii gates that progress down to the coast.  Purifying ourselves at the water well, we entered the sanctuary.  I caused a bit of a stir with my camera.  Unaware that a service was in progress, I was trying to capture every moment of our trip.  Suddenly a guard stepped in front of me with his arms crossed over his chest, which in Japan means “no.”  The camera was put away immediately.

We veered off to the gift shop beside the main sanctuary. Various items of religious importance could be purchased.  Amulets, enclosed in bright silk fabric, possessed various properties.  Written in English, we bought according to our needs.  My oldest son found one for “successful studies.”  I bought one for “good health and happiness.”  With our sightseeing nearing an end, we exited the grounds to the left and found a narrow blacktop street and sidewalk leading into the forested hills.  My Google maps showed another religious complex about a mile away.  It wasn’t on my itinerary, but it was a beautiful day in May for a walk, so we went for it.

Passing through a traffic tunnel, we emerged to find a sacred compound on our right called Kenchoji. The crowds grew smaller as we walked further from the center of town.  Unlike Tsurugaoka Hachimangu, which was free, we paid a small fee (300 yen) to enter this complex. There were no lines, and with the English pamphlet we were given, we explored the extensive grounds.

Kenchoji is a Rinzai Zen temple and ranks first among Kamakura’s Five Great Zen Temples.  These sacred grounds were marked with towering gates(signifying our passage from the outer world into sacred space), Beautifully manicured gardens, shrines, a Dharma Hall, Grand Gate, a monastery, a Zen garden, a large Buddha Hall and Bell Temple all occupied the compound and was designated as a national treasure.  My oldest son found the incense burner standing in front of the Buddha Hall mesmerizing.  He bought a stick to burn, an offering to Buddha.  In Zen Buddhism, this also meant a symbol of unity. 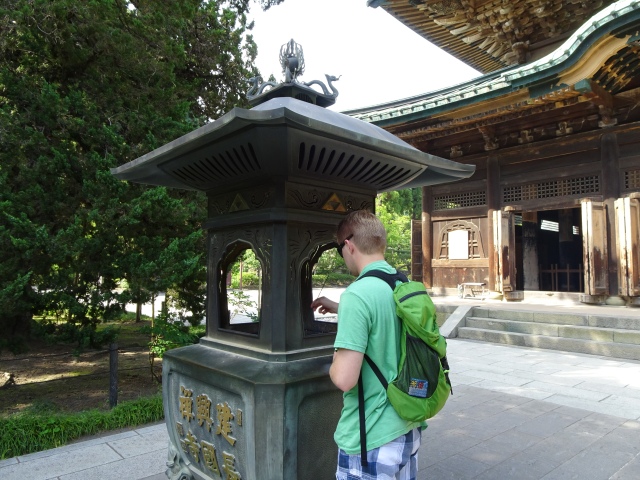 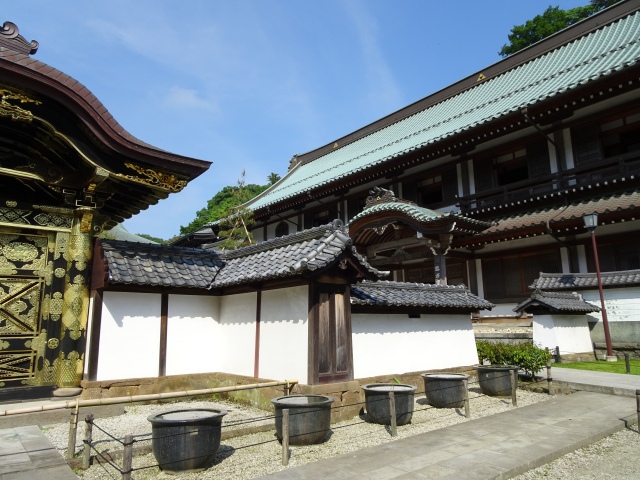 As we viewed each structure, reading its historical importance, I discovered that a 20-minute walk further into the compound would take us to a lookout that would give us a view of Mount Fuji.  Were we up for the task?  We had been on our feet for about five hours, starting with our commute.  Not willing to show that their mom could outwalk them, they said, “of course!” Heading further in, we skirted beside two massive wooden buildings with typical steep sloping irimoya roofs.  The path was paved, stretching deeper into the woods.  We past under smaller Torii gates, tall headstones engraved with writings, bronze statues that seemed to stand as guardians, to begin our slow ascent.  Reaching the final platform on the hillside, we found ourselves in front of the last shine on the compound, Hansobo Shrine. The view was well worth the climb.  For miles, we overlooked forested hills, the Buddhist compound, and somewhere hidden in the hazy horizon was Mount Fuji.  Kenchoji was well worth a visit.  It managed to instill a peace that all of us appreciated.

Hailing a cab, we had just an hour to see one of the most iconic statues in Japan, The Great Buddha, before the grounds closed.  My heart started racing.  I didn’t want to miss this colossal bronze Buddha that had moved so many, including Rudyard Kipling, during his visit in the 1800s.

We drove through tunnels and zigzagged through narrow residential streets, sometimes pulling to the side, allowing an oncoming car to pass.  Would we make it?  The question loomed over me.  Our hour was whittling away, and as I glanced at my Google maps, a popup warned me that the sanctuary would close in 45 minutes.  A feeling of dismay began to wash over me.  I told myself that it was O.K. if we missed it.  I was the only one who really knew its history.  The rest of the family had not gotten involved in researching the sites of Japan(other than Japan’s anime mania).  They drifted happily along, relying on my leadership.

With 30 minutes to spare, we stopped in front of a small nondescript entrance, flanked with trees and two deities housed in towers.  Our cab driver confirmed we had arrived.  Walking down a long, gravel path, the Buddha grew larger as we neared.  Towering over us, we stopped at the base.  The presence of the statue stilled us, and we found a sense of peace within ourselves.  Even the boys couldn’t deny the effect the Buddha had on them.

Walking back to the train station, some streets closed off traffic to allow locals and tourists to stroll down their centers and visit shops whose doors were open for the evening.  It was peaceful. I’m a dog lover by nature, and during my trips, I can’t help but take snapshots of dogs when I’m away from home.  Below were these two cuties gazing out of one of the shops. 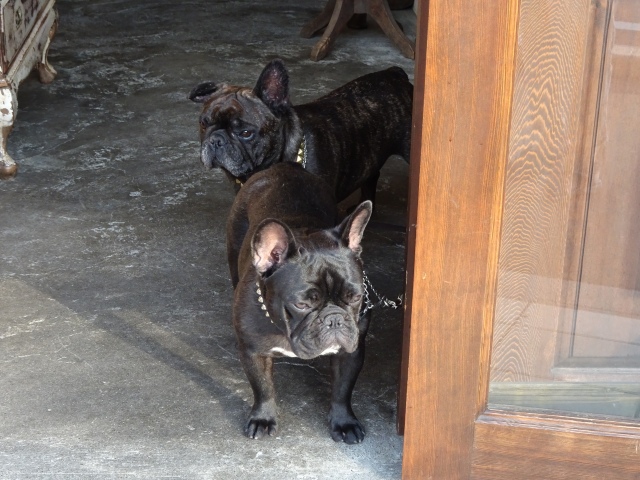