Aguas Calientes seemed to be on very few itineraries when I researched traveling to Machu Picchu. I was perplexed. Located at the base of Machu Picchu mountain, Aguas Calientes had optimum access, with only a 20-minute bus ride to the Inca citadel. Aguas Calientes, furthermore, had an intriguing feature. With my smattering of Spanish, I knew the name to mean, literally, water hot. Did it have hot springs nearby? Location and the ability to relax in hot pools after an arduous hike in and around the ruins were two features that drove me to book a few nights in this town.

Many tours for Machu Picchu originate in Cusco. The schedule entails a short drive to Poroy which has the nearest train station and riding a train. The problem with starting from Cusco is that time at Machu Picchu is drastically shortened. We would spend six hours on a round-trip train ride and around four hours on the mountain. I had studied ancient Latin American civilizations since high school. Fascinated by the cities left behind, I had dragged my husband over the years to the Mayan ruins of Chichen Itza(on our honeymoon), climbed the steep pyramids of Tikal in Guatemala, wandered the grounds of Chacchoben, Mexico and pondered the Heiaus in Hawaii. My attraction to these enduring structures and the people who built them never waned. A trip to Machu Picchu warranted more than four hours.

I suggested that we board the train at Ollantaytambo, a town located two hours from Cusco in the Sacred Valley.  This gave us an opportunity to tour Peru’s countryside before taking the only means of transportation to Aguas Calientes.  There are no roads stretching into the narrow canyon leading to Machu Picchu.  Our longtime friends, Ken and Sheila, were on board for this extended adventure.  At 5:00 p.m., we reached the end of the line for Peru’s rail system and was welcomed by the hotel porter. As a courtesy, the hotel sent a staff member to carry our luggage. Other than the buses that drive up to the ruins, there are no automobiles in Aguas Calientes.

We wound through a make-shift market crowded with colorful souvenirs, alpaca scarfs, gloves and caps, jewelry, bags, and much more. Reaching a flight of stairs, we descended to a thoroughfare marked by a set of train tracks that ran in front of our hotel, the Hatun Inti Boutique. The tracks weren’t a good sign.  I silently prayed the trains stopped service during the night. 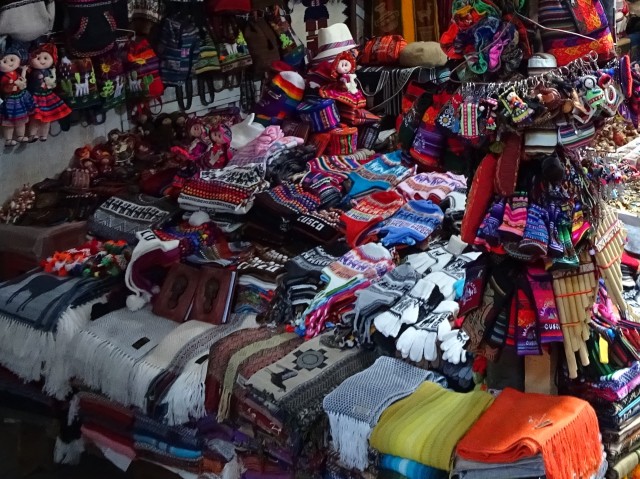 The lobby doors were wide open to the late afternoon air, revealing a spacious lounge with artwork and a bowl of dried coca leaves for consumption. With their known properties in alleviating altitude sickness, the coca leaves seemed to be a standard in most hotels situated in the high Andes. The staff welcomed us and checked us in promptly. We were assigned rooms away from the trackside with views overlooking the river.  My concern for noise eased.  Stone stairs wound along one end of the building, floor candles were used to light the dark passage.  Entering our room on the third floor, I happily noted the spacious layout with a sitting area, large bathroom with shower and jacuzzi, fireplace, and balcony.  I pulled open the door, allowing the sound of rushing water to spill in. Jim and I plopped down on the soft, white linen-covered bed.  It was time to relax. 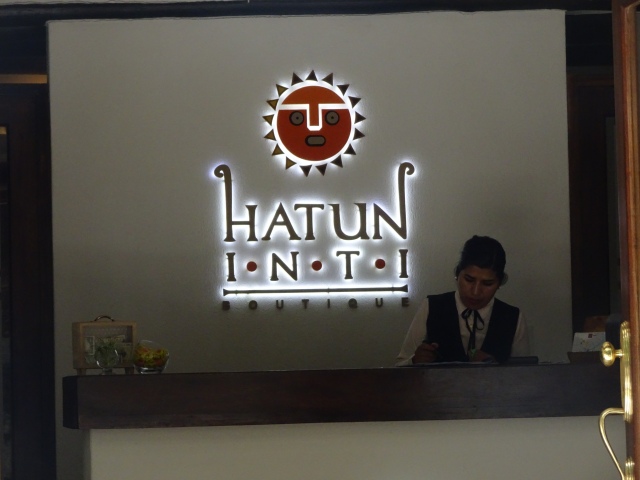 As the afternoon turned to early evening, we pulled ourselves away from the hotel and explored the town where train lines ended and jungles began.  Signs directed visitors to thermal baths tucked high into the hillside.  Unwilling to climb more hills, we decided to walk along the tracks that followed the Urubamba River.  As we walked further into the gorge, we heard the roar of water. Because we were at the end of Peru’s dry season, the river was low and seemed hardly responsible for the noise. We soon came to a bridge that crossed a tributary tumbling through town with a force that could sweep away anything in its path. Its white, churning waters expelled a fine mist into the air that cooled our faces and carried the fresh mountain air.

The tracks came to a dead end, and we crossed a dirt road making our way into the center of town. The evening was quiet. We found a plaza where a few locals were enjoying the night. Children played around a fountain while parents watched. A small church stood at one end. The bars, restaurants, and shops that surround the plaza were empty. As with most of the architecture in Aguas Calientes, there was a mishmash of old and new, corrugated roofing with questionable supporting wooden poles beside new stucco and tile. 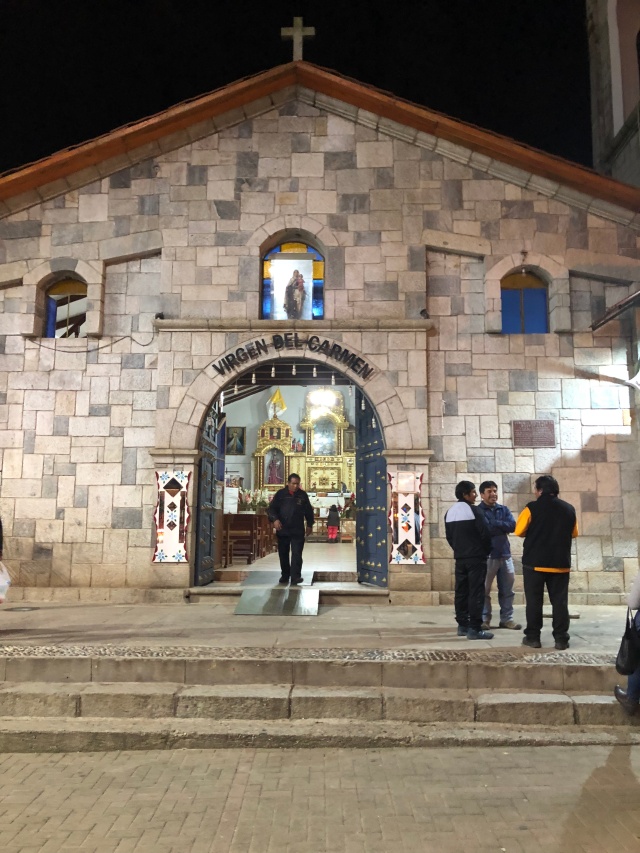 We were getting hungry and decided to backtrack to Mapacho, a Peruvian restaurant recommended by our hotel. When we stepped inside, the climate changed. Busy with locals and tourists, the sound of excited voices and laughter filled the dining room. We were quickly seated. Our waiter came to our table, upbeat and talkative.

Most Peruvians are friendly and conversational. Luis was no exception. As he took our drink orders, he asked where we were from. Nevada seemed to confuse him, but when we said Las Vegas, he knew the gambling and entertainment mecca of the United States. Ken wondered if Luis was a native of Aguas Calientes.  The town was so remote; we wanted to know why people stayed. Our waiter was delighted by the question.

“Oh, sir, that is a long story. Give me a few minutes, and I will come back and tell you.”

We were surprised by his response. Luis genuinely wanted to share his story. Our food, in the meantime, was served, and Luis continued to work other tables, but by the end of the evening, he returned.

“I’m originally from Venezuela,” he began. “I finished college and had hoped to get a job as an Accountant, but the situation in my country is very bad. I was concerned about my wife and child.  I wasn’t finding work, and it was hard to buy things. I could not tell my family that we would be O.K in our country. A buddy of mine is working in Lima. I contacted him and asked if he could help us. We were glad to get out of Venezuela, and so here I am waiting tables.”

Wow! We didn’t know what to say.  He told us that Peru was experiencing a sharp increase in immigrants from Venezuela. Folks were experiencing ever-increasing shortages of food, clothing, jobs. We appreciated this exchange characterized in conversation and interest of others.  We talked until closing time and finally said our good-byes.

In the morning, we fueled up with our hotel’s impressive breakfast buffet of meats, cheeses, fruits, and bread.  Eggs were made to order, coffee was served, and views of the river were enjoyed.

Shop owners were busy cleaning sidewalks as we headed out to explore Machu Picchu.  We walked along a dirt road to the bus terminal.  The morning was overcast with heavy clouds, but the “rain gods” were kind.  We experienced an intermittent drizzle that soon ended for the day.

By the evening, we were winding our way through the interior of Aguas Calientes to find a popular hangout.  Feliz Indio was packed when we arrived. The restaurant walls were plastered with business cards and foreign currency, giving a sense that this was a “must stop” by the consummate traveler. The food was exceptional, but the service was slow (The downside of a super popular establishment).  Our waitress apologized for the wait. I just wanted to collapse into my comfy bed at the hotel.  After dinner, Sheila and I were eager to walk back to our rooms, leaving the guys to enjoy their last night in Aguas Calientes.

The guys headed off for a “night-cap” at one of the many bars around the main square. Walking into a room with only a few patrons, the bartender was delighted to have new customers.  He suggested a popular Brazilian rum drink, Cachaca 51.  Mixed with sugar and lime, Jim and Ken later told us about the new drink they discovered.   With little else to do but watch 80’s music videos on a flatscreen TV, the guys soon called-it-a-night.

Was Aguas Calientes generally a quiet, sleepy town or was it simply our timing, visiting in October?  It is well prepared to receive travelers with many options for lodging, eating and touring.  We welcomed the slower pace from busier schedules we faced on our Peruvian trip.  Set in the midst of the rugged, green mountains of the Andes with rivers tumbling past town, it is a picturesque scene.   Its location was ideal for the extended time we wanted to spend on Machu Picchu.