The Van lumbered its way over the cobblestone road, climbing upward from the Sacred Valley to the town of Ollantaytambo. It jostled us around like Mexican jumping beans; the rattling sound inside made it hard to hear Jose’s exposition of the area we were approaching. I watched out the side window as a brief shower created a blurry scene through the glass. A long, stone wall from the days of Inca occupation rose on my left; newer, stucco buildings flanked our right. We were officially entering one of the oldest continuingly occupied cities in the Valley.

Golden hues were painted on the town’s buildings; red tiles adorned the roofs and massive dark grey blocks of stone decorated the base of structures. I had never seen a more colorful community. As we drove further, the traffic increased. Our van came to a halt. I shifted in my seat to see the cause.  A delivery truck was slowly crossing over a one-lane bridge, bypassing a river moving swiftly from the foothills on our right. The water, opaque in color, slammed over boulders. I found it a welcome sight against the parched, rocky hillsides of the mountains that surrounded us. With anticipation, I leaned forward as the van advanced in its queue. Built into the steep slopes, I looked for the fortress that contained some of the most baffling structures in the Andes.

Ollantaytambo did not have the recognition that Machu Picchu garnered.  In fact, several tour companies bypassed this exceptional complex, with offers of days trips from Cusco to Machu Picchu via a non-stop train.  We were going to see artifacts found only in Ollantaytambo.  As we rounded a bend, the low adobe buildings parted. Towering above us was a network of stone terraces, imposing megalithic walls and temples. My first thought, “was it built by giants?”

We had started from Cusco around 9 am, climbing out of “the navel” that the Inca aptly used to describe the bowl-like depression the city sat in and crossed the Altiplano, a 13,000-foot plateau, between Cusco and the Sacred Valley. The elevated landscape induced amazement as it brought us closer to the heights of the snowcapped Andes. Little grew on the Altiplano other than short grasses, trees clustered in gullies, and potatoes (3,000 varieties, no less, pointed out by our guide when I asked about the solitary plow standing in a field). When we started to descend on switchbacks, the appearance of ancient terraces drawn like geometric artwork across the slopes opposite the valley was no less astounding.

Sheila kept Jose busy with her list of questions as we drove along the countryside.  She wanted to know about the political climate in Cusco.  I assumed this line of questioning was brought on by the many political campaign posters plastered along the roadside.  Elections had taken place while we were in the country.  After some prodding, he did admit that corruption was unavoidable.  Those in power, the wealthy, stayed in power.  I was content to look out the window and watch the landscape change from villages to rolling hills to plunging valleys.  The land was neutral, people weren’t.

As my gaze followed the network of terraces and stairways built into the mountain,  I couldn’t help grow perplexed at the contradictions I saw. The Incas were small people, only 5 feet by most accounts. Why would they build such massive structures? Granite blocks weighing more than ten tons were placed one on top of the other with tight precision. No mortar was applied on these walls, yet other structures had the sloppy paste. How did they transport these insanely heavy stones to the top? Archeologists can find no evidence of the wheel or pulleys that would have assisted in moving these megaliths. 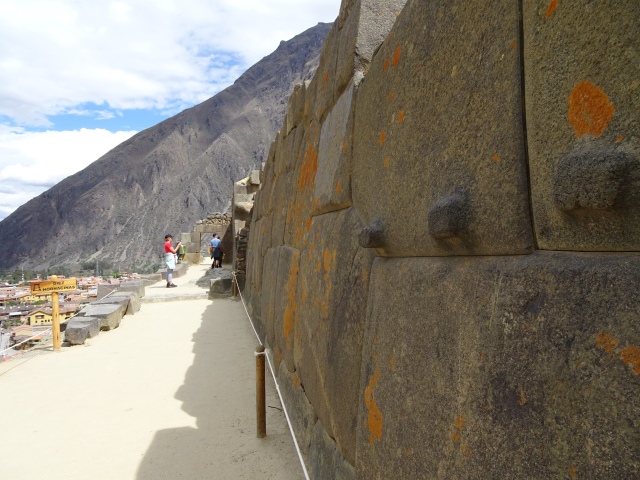 The scenery in the valley had also thrown me into a reasoning frenzy. The mountains were dry and barren with patches of cactus, scrub bush and dusty, draping plants that I couldn’t identify. Yet, the valley floor was covered in verdant, green carpets of healthy crops, towering trees, and flowers. Mirco climates are typical in the Sacred Valley, but so close together was unnerving.

Our driver stopped near the main entrance. We grabbed our rain jackets before we disembarked. With clouds hanging over the mountains and a few sporadic raindrops falling, we didn’t want to be unprepared. Jose guided us through the vendor’s stalls lined up in front of the site. The bright pinks, oranges, purples, and reds that the local Indian population preferred, stood out against the greys and tans of the granite hillside. These open-air markets were at every popular archeological attraction we had visited. They were a distraction, but I was getting used to them.

The cobblestone courtyard had another distraction that was unique to Ollantaytambo.  Narrow channels of running water imbedded in the ground cut through the vendor’s stalls.  Gingerly stepping over them, I recalled that explorers often noted the engineering mastery of water diversion by the Incas.  The soft sounds of the refreshing mountain water made a pleasant reprieve against the harsh landscape.

We reached a tall door cut into a wall that fronted the complex and presented our tickets. Walking into a spacious plaza, we stood a moment, taking in our surroundings. No wonder the Spanish called Ollantaytambo a Fortress. It seemed impenetrable, towering above us and commanding a strategic view of the valley below. It was here that Manco Inka in 1536 held off the Spanish army in an attempt to regain control of his empire.  His rebellion failed and he fled into the mountains.  Slowly slipping into the hands of foreign manipulation, the Inca empire would have puppet leaders installed by the Spaniards until it would fall altogether by 1572.

Almost going unnoticed were the gigantic, stones interspersed with empty spaces standing on the grass. Displayed along a line, I wondered why they were there? What was their intended use? Some of the rocks were cut as tall as a 6-foot man.

Our objective was to climb some 200 steps to the top, where the renowned Temple of the Sun stood. Stairs flanked the terraces which were cut at 12-foot depths into the slope. Sheila declined the climb, stating that she needed to save her knees for our next stop. Besides, she noted, there were plenty of ruins to explore at the bottom of the complex.  I couldn’t blame her. Our time was limited.  We had a train to catch at 3:30  that would take us to the subtropical realms of Machu Picchu.  We were going to move fast if we wanted to see Ollantaytambo’s notable artifacts.

The clouds began to break as we made our ascent. My heart pounded in my ears and strained against my chest. At an altitude of 9,000 feet, Ollantaytambo is higher than our hometown of 2,200 feet. With slow, deliberate steps we made it. The orientation of the Temple of the Sun was stunning. With the ability to view the valley in a 360-degree turn, little is hidden. Sunlight, in all its brilliance, transformed the landscape into vibrant colors. A sense of being suspended between the bright blue sky and dewy, green fields below struck me as some technicolor wonderland. My attention to Jose’s narrative faded as the sight before me of intersecting valleys, and imposing mountains vivified. At one end of the Sacred Valley, a snowcapped mountain stood guardian while the bases of mountains crisscrossed to close off the other end. An elemental power that the Inca must have sensed seemed to generate here. No wonder they saw themselves as gods.

Ollantaytambo’s ruins indicate that it was a holy place. Temples and purifying baths are scattered around the grounds. A Spanish chronicler and priest, Padre Bernabe Cobo, supported this concept when he investigated the local religion while living in Peru during the 1600s. Through interviews, he was told about a place where the Incas believed their first god appeared.  Below the fortress, a series of shallow terraces create a window depressed into the ground. Once a year, the sun’s rays pierce between the mountains to light up the rectangle during the winter solstice. In Inca mythology, it is here, referred to as “the house of the dawn” that the first ruler appeared emerging from the underworld to lead the people.

The “otherworldly” was a concept hard to ignore. Both light and shadow, mountains and rivers, stones and plants come together to blend elements into a mythical world. We walked among extraordinary structures carved out of the granite hillside.  An enormous throne sits at the edge of the ceremonial platform, overlooking the valley. 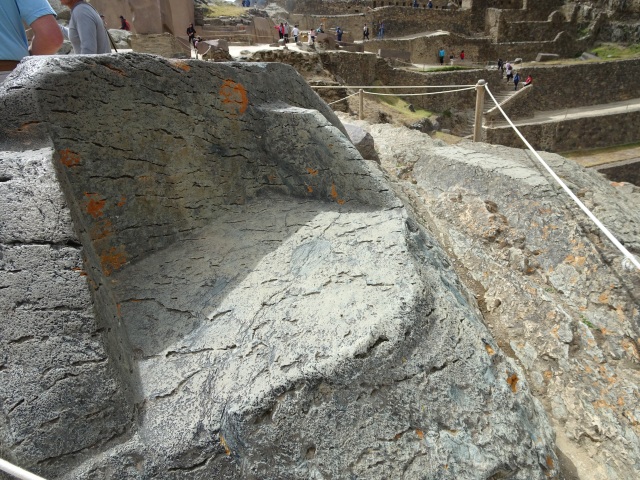 Six 12-foot slabs of rose granite stand verticle as part of the unfinished Temple of the Sun, weighing around 50 tons each. Archeologists can only guess how they got there. A menacing face, two stories in height, is seen carved out of rock on Mt. Pinkuylluna across from the religious complex. Jose informed us that this was a holy man, Tunupa, who unified the Inca through teachings of civility, and the “right” way to live. The legend says that Tunupa eventually walked to the sea and disappeared. It was another mystery in Inca history. 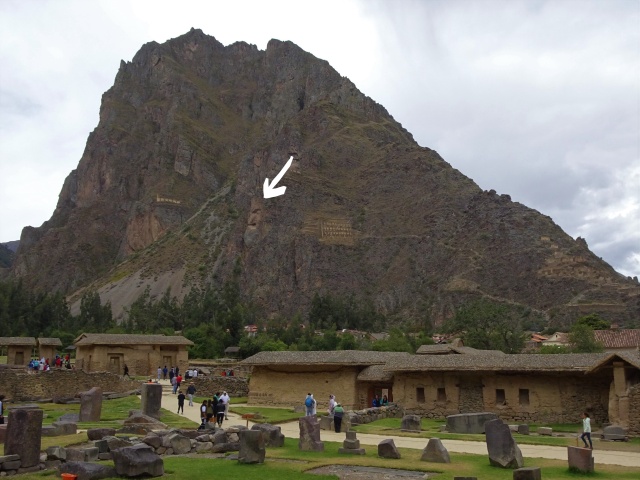 After exploring the spur of the mountain, Jose had an idea. Would we be interested in walking along the mountain slope and into an adjoining valley? The trail was used by the Inca arriving from the East. We would see a guardhouse and then descend to the royal baths. I eagerly agreed to the impromptu suggestion. Jim, however, was starting to feel the nagging effects of Acrophobia and asked to be pointed to the nearest exit off the hilltop. Ken and I took a moment’s pause.  Were we all heading down? With assurances that he could navigate the stairway alone, Jim insisted that we continue.

As we set off, I noted the small sign staked into the ground, “Cuidado. Zona Peligrosa” Be careful. Dangerous Zone. I watched my footing as the uneven paving stones snaked around the sharp juts of rock that made a wall on my left. Rope and posts served as a guardrail for the dropoff on my right. Jose and Ken pulled ahead and stopped at the guardhouse. Discussing the construction of a high wall that was precariously built on the edge of the path, Jose pointed out the ingenuity of these long-standing structures. Built to endure earthquakes, it was one of the reasons that the walls were still standing. I couldn’t help but stick my head through one of the portals that overlooked the valley. The air remained calm and clear. Sounds seemed to dissipate in the vast spaces while the valley floor disappeared between interconnecting mountains.

Our hike eventually took us down a long, stone staircase where Jim and Sheila waited. Together we walked across the plaza to the royal baths, found in a maze of low, crumbling walls. Water still flowed through them. Precise, decorative lines carved into one of the fountains seemed like it was made recently and not hundreds of years ago.  How did its craftsman manage such a smooth surface and intricate lines?  We finished our tour by the Princess’s Baths. One could spend days here but we had a train to catch to Machu Picchu. 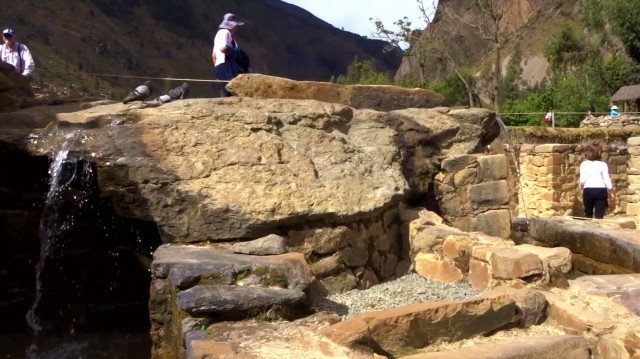 I took a last look at Ollantaytambo. The contrasts inherent in the landscape and manmade structures must have empowered the Incas and awed the first explorers.  Only in the Andes did this seem possible.

One thought on “Ollantaytambo, Peru”