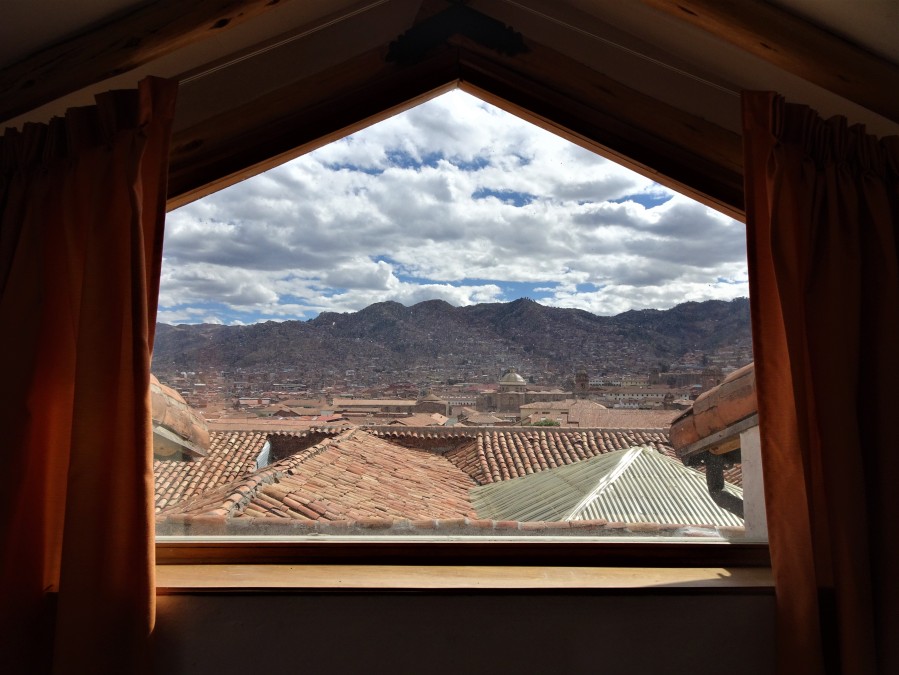 The tension slowly ebbed away as I sank back into the aircraft’s comfortable, leather seat.  Beside me, my husband had pulled his baseball cap over his eyes to rest.  Beyond him and across the aisle were two men in business casual attire engaged in conversation.  I was sitting in an upgraded seat due to an unexpected email from Avianca Airlines.  They had a policy of offering unsold first-class seats to current ticket holders using a bidding system.  The bid started at $45.00.  If your bid was accepted, Avianca would notify you a few days before the flight.  I thought, “what the hell, I’ll start the bid.”  Now it seemed like a well-deserved luxury.

Boarding the airline in Lima, however, had proved to be far from pleasurable.  The flight was delayed.  The first announcement assured us that the plane was only 20 minutes late.  When 20 minutes passed,  an update declared that the aircraft was on its way and now 30 minutes out.  Yikes!  I had scheduled and prepaid for a personal tour in Cusco shortly after we landed.  I thought I had allowed enough time, but that window was closing.  As I nervously calculated the hour and a half in the air, with about thirty minutes to drive to our hotel, along with an unknown time delay checking-in, the best-case scenario was showing up late.   Worse, our tour could cancel altogether.

My thoughts began to race as anxiety slowly slipped in.  Sitting in the waiting area of the airport terminal, I pulled out my itinerary to see how I could rearrange our schedule for tomorrow.  What I had for today’s plans couldn’t be missed.  Getting a hold of the tour company served as another problem.  Their number wasn’t dialing through.  How was I going to notify them of the delay?  I took a deep breath.  Wasn’t this vacation suppose to be fun?

Finally, in the air, I allowed myself to relax.  I had no choice.  I would deal with our schedule once we landed.  The brown, barren hills of Lima had long ago disappeared.  I was now gazing down on the rugged summits of mountains, a spattering of them capped in white.  Dressed in browns and greens, the Andes gave me some concern.  Valleys plunged thousands of feet to subtropical climates.  Would the severe temperature differences between valley and mountain affect the air currents?  Were we in for a rough ride?   The plane, however, glided smoothly through the clear atmosphere, and I happily sat back, enjoying the view. 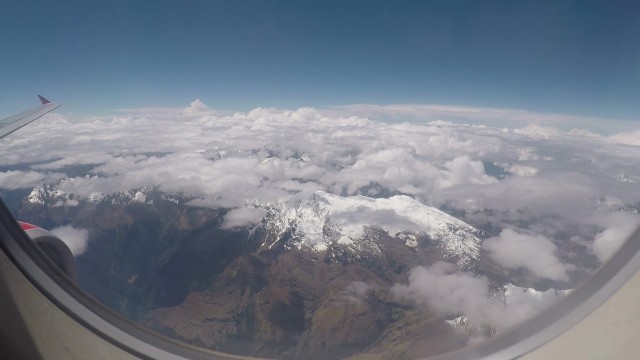 As we neared our destination,  the tight range of mountains opened up to reveal a large depression or bowl marked with golden hills and clumps of trees.  It was the heart of the Inca Empire, Cusco.  At two in the afternoon, the airport was quiet.  We made our way to the main exit and were surprised to see a barrel of dried coca leaves available for the taking.  My husband grabbed a handful and stuffed the leaves in his pockets.  I took a few, chewed on them, and (when no one was looking) gracefully spit them out.  Although they were known for alleviating altitude sickness, a common malady for visitors, the taste was grassy and bitter.  I wasn’t a fan.

At 11,100 feet, Cusco is one of the highest cities in the Andes.  Travel books, blogs, and companies emphasize the importance of acclimating once you arrive to avoid the possible onset of headaches and nausea.  There are a few ways to do this.  Drink a lot of water.  Take it easy the first day or two or consume coca leaves by sucking on coca candy, drinking tea, or chewing on the dried leaves.   I personally liked the tea which I had later.

Taxi cabs were waiting behind steel fencing for the disembarking passengers.  Drivers stood by their vehicles, waving to get our attention.  There was no queue, so we walked toward a van that could fit the four of us and our luggage.  I had found out what to expect as a charge to our hotel while researching sites on the internet.  Twelve dollars was the going rate.  Asking the price before getting inside the cab gave us leverage.  We didn’t have to bargain. The driver quoted us the fair rate.

To our surprise, a stranger jumped into the front passenger seat and rode along with us.  Was he a co-driver?  After some pleasantries were exchanged, we found out that he was selling tours around Cusco.  Wow!  These guys were aggressive.  We kindly explained that all our tours were set up through SunGate Tours.  Still insistent that he could help us, he asked us when we were leaving Cusco.  We said in five days.  He then arranged to have a cab pick us up and take us to the airport on that day.  Before we knew what was happening, a sale was made!

Our hotel, the Casa San Blas Boutique Hotel, was on the northeast side of the city.  I wanted to stay in a place that was indicative of the area, authentic and intimate.  Once a rambling colonial house, the hotel extolled its homey atmosphere, homemade breakfasts, and welcoming and caring staff.  Built on a hill along with other tightly packed buildings, it was in a colorful district called San Blas.  With a mix of shops, art studios, and residences, it sat on a street that was a few blocks away from the busy historical town center.

Entering the small lobby, we were fortunate enough to find the receptionist available to check us in promptly.  I noticed a refreshment counter where again coca leaves were offered with hot water for brewing the tea.  I would soon discover that it would be a common staple in the Andes.  The staff took our bags to the third floor where our rooms had panoramic views of the city.  We had just enough time for a quick break before representatives showed up from SunGate Tours. 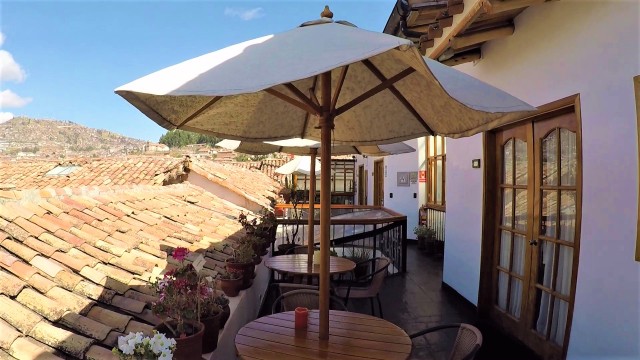 The Plaza de Armas was the first stop on our afternoon tour.  Walking along the narrow cobblestone street in front of the hotel, we got to know Jose, our tour guide.  Growing up in Cusco and a teacher by profession, Jose would prove to be a wealth of information.  As we emerged from the street flanked by white stucco buildings, tall stone foundations, and colorful markets, a large town square opened up in front of us.  It was awe-inspiring in its grandeur.  Sheila and I immediately pulled out our cameras, taking shot after shot.  The Cusco Cathedral loomed beside us with its gothic bell towers, heavy, green wooden doors, and decorative columns.  Our husbands politely listened to Jose, but I was distracted by the beauty of the sights, and Sheila had drifted away taking photos. 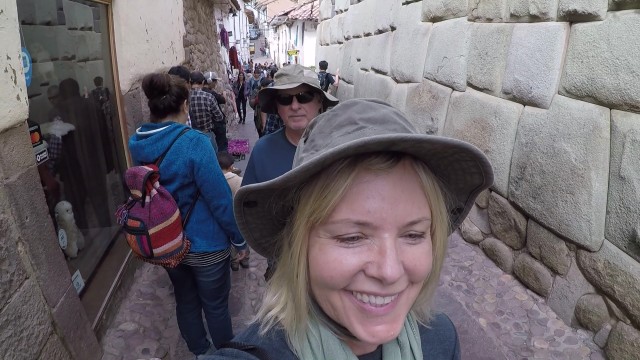 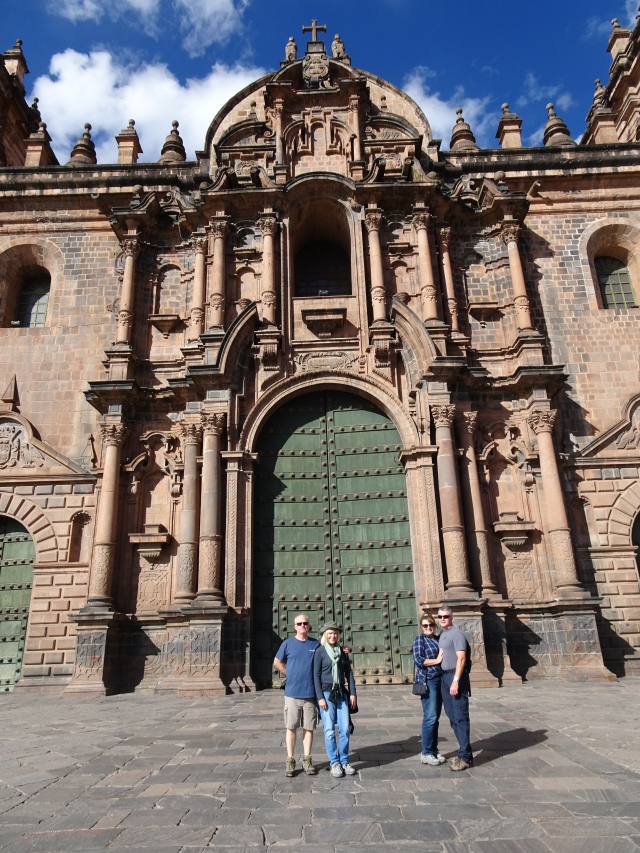 Surrounding the Plaza, buildings in Alpine fashion housed luxury shops, restaurants, and bars.  A few buildings incorporated the massive stone foundations left behind from the days Cusco was an Inca capital.  Spanish colonial architecture, however, dominated the square with the abondance of towering churches close by.  In the middle of the square stood a golden statue of Pachacuti, the Inca leader, remembered for his expansion of the empire.  Flowers and manicured lawns radiated out below him as he stood with authority, his left arm raised towards the mountains, and in his right, the staff that legends say sunk into the ground, determining that Cusco would be the center of his kingdom. 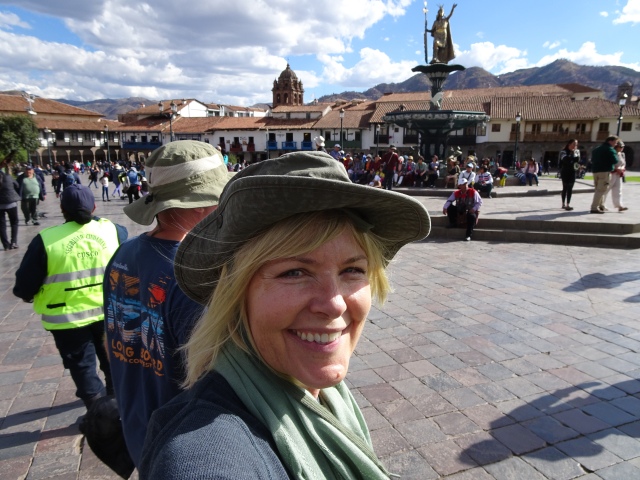 Locals and tourists alike mingled in the square.  Safety seemed to be well thought out by the city as security was always present on the streets and in the square.  My husband, however, was later approached in a bathroom bar by a man who wanted to know if he was interested in a snort of cocaine.  Just finishing up a line to carry him through the evening, he apparently thought that sharing was a friendly gesture.  To some, maybe.  My husband kindly declined.  Underlining that safety, the drug element lurked.

I wanted to explore every corner of the plaza, but Jose guided us to the entrance of the Cusco Cathedral.  Inside, we couldn’t help catch our breath in awe.  Vaulted ceilings arched at least 30 feet above us.  Along the left wall, altars rose from floor to ceiling.  Baroque in style, gold-leaf covered the entirety of the shrines, dressing every crevice and corner, inset and raised panel, twisted columns, and decorative corbels in sunlight.  The contrast in the cavernous cathedral was stunning.

We steadily kept moving through the cathedral.  Numerous paintings in dark renaissance form, stylized furniture in blackened cedar, rooms that branched off from the main sanctuary, and finally, a crypt were quickly viewed.    We were amused by one massive oil painting depicting the Last Supper.  In the middle of the table, was a roasted guinea pig on a platter.  It must have had more meaning for the locals than a loaf of bread! There was much more to see, but we had one last attraction to visit before closing time.  It was the spawling ruins of Saqsaywaman.

Avianca allows passengers to obtain boarding passes over the internet or on their App 24 hours before departure.  Our hotel could print them from their office.  This saved us a lot of time at the airport by bypassing check-in lines and going straight to the gate.

Not all the airlines in Peru board passengers from inside the terminals.  I watched out the porthole as we taxied away from the pedestrian bridge and saw passengers walking across the tarmac to board economy driven airlines.  If this is important to you, check your airline carefully.

For more information and an excellent source to use as a self-guided tour when sight-seeing the Cusco Cathedral, check out http://www.qosqo.com/catedral.shtml.

One thought on “Cusco and the Cathedral”